3-5 of May Kyoto Taikai and Yuubukan. Getting back to Tokyo to return Italy.

After Yoshino visit, I went back to Kyoto to watch the Kyoto Taikai and to participate on the 4th of May to asageiko and to the World Kendo Network keiko kai organized by Maruyama sensei and Castelli sensei, the same day later in the afternoon. It was amazing to see at the asageiko so many 8th dan sensei. Because you need to be fast to do as much jigeiko as possible in an hour, I had prepared my men as japanese students do, it was already bound and I could ware it as a motorbike helmet. With this approach I did 4 jigeiko in the available time and the first jigeiko was with Tani sensei. 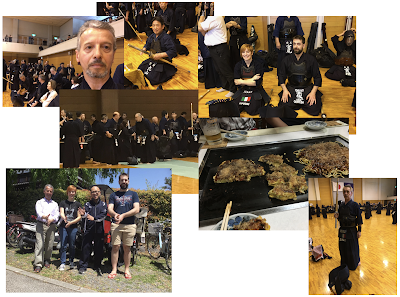 After asageiko, with my friends I watched the 7 dan shiai and I made a video of my sensei:


In the afternoon at 14:00 we had the World Kendo Network keikokai and I had the possibility to practice with Castelli and Zago sensei and I asked them some advices for my incoming 5 dan exam.
Briefly, my seme seems to be reasonable, but I had to push with the back foot more effectively to have the right propulsion to strike men.  An important point is that I need to focus more on my kote and after striking I have to close distance, instead of waste it trying a slow two times kote-men.
The other point is that I have to go strait, not trying to go on a side of opponent before I finished my technique.

At the end of the day I was destroied and after a brief dinner I went to sleep.
The next day, Sunday the 5th, I went for the second time to Yuubukan with Alessia Caporaso, Luca Cerfeda and Lucilla Amerini. The two and half hours of keiko were particularly dense. After taiso with children we started various rounds of kirkaeshi followed by some basic attach and counter attach techniques. Then, we had nearly 40 minutes of jigeiko followed by few brief shai. I did with Alessia that won, then Luca did with two local Japanese and he striked a great yakudo. After the shai with Alessia, I had a shai with a local Japanese and I did the shai in jodan, I tried a couple of kote that arrived at the site, but not with the correct angle, the shiai finished without nothing done by both of us. Lucilla instead did with a Japanese first and then with Alessia.
It was a nice end of my staying in Kyoto. At 14:00 I was on the train to Tokyo, where I spent my last night and on the 6th I catch the flight to Torino.