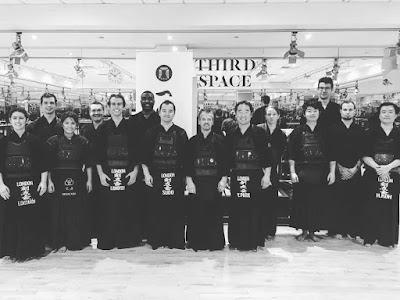 Last weekend I was in London for the OG Single cell sequencing meeting. On Thursday I had the opportunity to practice at Kenyukai dojo with my friend Young Park. As usual it was a very nice evening with basic suburi, basic techniques with full bogou and finally jigeiko.
I had keiko with Sudo san and Park sensei. I was not satisfied of my jigeiko both in chudan and in jodan, and my feeling was confirmed by Young. My kamae was not strong enough and my seme was  ineffective. At the second dojo we were discussing on the rising difficulty in passing exam getting older. Regarding this I found very interesting two articles of Geoff Sensei, which unfortunately pass away last week, and, since I am now near the 60s these phrases inspired me and made me thinking:
and
The above phrases agrees with the Young indications suggesting me to use as my reference old kenshi with level greater then me to focus more on spirit strength than on physical strength. So now I have an other little piece of the puzzle for next exam and I have to find the right place where to place it in the full picture.

Although my weird Japanese knowledge,  I also found very interesting this YouTube video

Posted by Kendomaniac at 10:12 AM No comments:

Last Thursday I went to the evening practice at Shubukan - Massari, the dojo where I usually practice when I am at home in Torino. The instructor of Thursday practice is Arialdo Bolognesi (7 Dan).

Usually the practice is divided in warm up, kion and jigeiko. During Thursday practice usually we have the majority of the people that is below nidan and we dedicate quite some time to basic practice.
This time I was running the warm up and the basic kion. I focused the lesson on the combination of techniques and on changes in techniques repetitions to keep the attention of everybody always high. On the last 20 minutes we had  mawarigeiko. During mawarigeiko I was focusing my attention to seme, inducing my partner to attach. On the last jigeiko I was practicing with Arialdo. It is always very challenging, because I have to find an opening and, although I know that his preferred technique is kaeshi do, there is no way to avoid to be catch by him.
However, this time instead of kaeshi do, I was blocked a couple of times by the tip of his shinai during the attachs.   At the end of jigeiko, Arialdo told me that I was not searching the center and for this reason he stopped me with shinai. He suggested me to add more shinai work to improve my seme. It is something on which I was already working, but as frequently happen, at least to me, during the practice your attention focus on other points and this time my tip was definitively out of my attention. Looking forward to test again the combination of tip center and seme next week.
Last but not least, as frequently happen in kendo, suddenly something you were unable to do for a long time it comes out. I was very surprised that simply changing a little the grip of my left hand on the shinai make me able, finally to strike some decent kote from jodan-no-kamae.
This is the nice of Kendo there is always something new to learn and something that suddenly comes out smoothly.

Posted by Kendomaniac at 12:42 PM No comments:

In May 2015 I passed my Yon Dan exam, now the time to test my personal Kendo improvement trying the Go Dan exam is getting near. For the next 10 months I will try to describe the challenging I will try to overcome to be prepared for the June exam.

Concerning Go Dan exam comments I found very interesting and in frame with my personal thought the comments on Go Dan Grading from Andy Fisher between, see between  6.44  and 12:20 mins  in [KENDO RANT] - Practicing for 5th Dan?  . From his comments I would actually highlight, for my personal journey, the following sentences:
Other keywords from www.kendo-usa.org:
At the beginning of September I visited Heijoshinkan  in Voghera and I asked my friend Claudio Scacheri (6 Dan) to make some rigorous comments on my Kendo to identify points to be revised in these months.

It came out that:
An other interesting point of the practice at  Heijoshinkan, was the execution of Bokuto Ni Yoru Kendo Kihon-waza Keiko-ho. Usually I do not practice them usually, but they very useful to fill more the body posture.

Posted by Kendomaniac at 12:12 PM No comments:

Singapore 2018: Chinese new year, the year of the Dog

It is a bit of time that I do not post on this blog but the work is always keeping me very busy. Nevertheless I still love kendo and I do my best to practice as much as I can.
I am writing this blog in Frankfurt airport, I just get off of the Singapore flight few minutes ago. I have to write this post now because when I will be home I will be too busy with the everyday work.
I have been in Singapore nearly 10 years, just one of two weeks, but every year.
This is the 4th time I run a RNAseq/ChIPseq workshop at Duke-NUS. It is a quite challenging task since I teach for nearly 7 hours every day for 5 days with the help of three local Bioinformaticians. It is challenging, but it is very nice to see people so interested to the topics I teach. This is the first time I am in Singapore during the Chinese New Year. I had the possibility to be part of three Loh hei, at Duke-NUS with the  Bioinformaticians, at Tangling Kendo Club and with my Singapore friends.


This time I did my best to have keiko nearly every night during my week in Singapore. This is a brief summary of the "fun" part of my Singapore trip.
Arrival on Saturday February the 17th late afternoon in Singapore, no keiko on Saturday evening, but I was struggling to have some Dim Sum, a kind of filled pasta cook by steam, I went to the Din Tai Fung restaurant in China town and I enjoyed dim sum.


On Sunday morning I went to the Singapore Kendo Club at Changi Japanese School. It was a light training because many people were in holidays. After I was guest at the home of my friend David Yeo, the Sensei of the Tangling kendo Club. It was a nice afternoon with kendo friends. 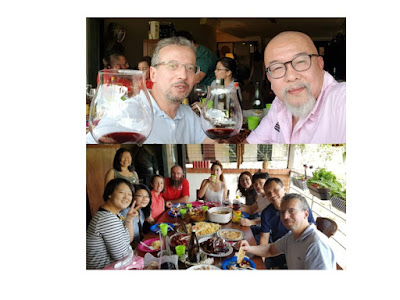 On Monday and Friday evening I had 2 hours keiko at NUS Kendo Club. The club is made by young NUS students and it is very nice to see their participation to the practice. The only problem, in the training at NUS, is that air conditioning is not present, so you run two hours of kendo at 32 Celsius and 100% humidity. I can tell you that it is very challenging, but it was great to be there. On Friday I had the honor to be one of the motodachi for the last 40 mins of jigeiko. Although many students  are just beginner they had a very good attitude in kendo practice and their kendo is quite clean. 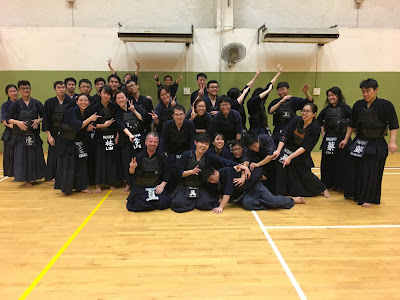 On Wednesday and Saturday I was at Tangling Kendo Club. It is always very nice to practice with my friend David and all people at Tanglin. The Tangling club has many foreigners  practicing there and it is very nice to see how kendo is the same even when practiced by people from many different places in the world. I was very touched by a little kid, Rafa, great great spirit and good technique. 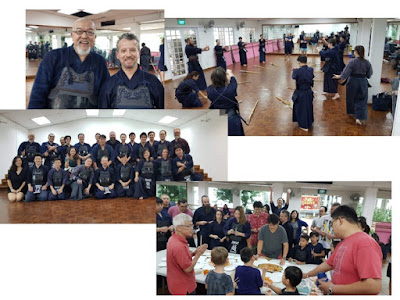 Off course kendo and food are friends and I had the possibility to test a lot of Chinese food. 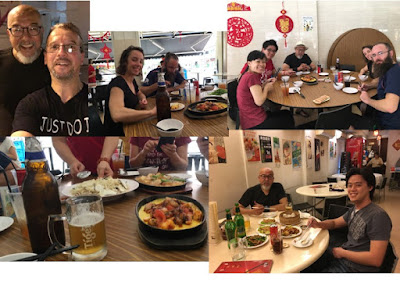 Last but not least I did also keiko at SKC in Clementi Japanese Primary School on Thursday. This training is limited to 2 Dan and above. We were few people, but the one hour practice was very intensive and I got quite useful tips from Damian sensei, teaching  in Clementi that night.
At the beginning of the practice Damian sensei asked everybody to have a goal for the evening and I was focusing in keeping the center during the jigeiko. At the end of the training, I told Damian sensei that I was realizing, during our jigeiko, that he was controlling the fight with his seme and I did not want to be controlled by him, but I could not find the right way of doing it. Damian sensei told me that keeping the center should not be a static condition, but it has to be dynamic, because must exist a mental iteration between the two opponents. Thus, response to a seme could be setting the conditions to perform oji waza or stepping back to grab again control of the action. The most important point is however the constant mental contact with the opponent. So, I got something to think about and try, till my next time to Singapore.

So taken together I had a really great time in Singapore, the only thing I unfortunately I missed was the Dragon dance. Let hope have the opportunity to see it on an other of my trip to Singapore.

Thank you to everybody for the warm welcome I got in every dojo!

Posted by Kendomaniac at 7:49 AM No comments: