March the 14th
Back again with one of my scientific/kendo trip.
This is the third time I go in Japan and I hope it will be a great experience (素晴らしい経験) as it was the other two times. Japan is an amazing country especially for somebody practicing martial arts.
I am, now, at Torino airport ready to go to Fukuoka for the workshop in Intelligent Informatics in Biology and Medicine (IIBM 2009) held at the Fukuoka Institute of Technology as part of the Third International Conference on Complex, Intelligent and Software Intensive Systems (CISIS 2009). The paper I have submitted to the conference was accepted and I will have my presentation on Thursday March the 19th. Being in Fukuoka I contacted SUMI Sensei (8th DAN Hanshi) which is the mentor of our Dojo in Torino and the Sensei of my instructor, Walter Pomero.
I am very lucky and happy since I will have the possibility to practice Kendo from Sunday evening, when my flight will arrive in Fukuoka, to Wednesday evening. I hope I will survive to training & jet lag. Probably being very exhausted I will sleep and I will overcome jet lag, hopefully

. It is the first time I will practice Kendo in Japan.
I will be back with more news at my arrival at Fukuoka, tomorrow.
......
March the 15th
Trip was long but absolutely on time. I managed to catch also the internal flight from Nagoya to Fukuoka, even if, at the custom, they ask me to unpack all the presents I have made for my friends. It was deadly long but, due to the efficiency of Japanese people, I managed to arrive on time in Fukuoka. Sumi Sensei and one of his student, Ishi, were waiting for me. We had lunch together and then I went with Ishi to do mitori-geiko, "watching Kendo", for a couple of hours since there was a Prefectures teams competition going on at Fukuoka Budokan. It was incredible to watch the tournament, the fumikomi were so heavy that all the gym was vibrating.
Subsequently, Sumi Sensei was so kind to lent me his bogu to go practicing Keiko in an high school. It was amusing wearing the Sumi's bogu, it is so light, nothing compare to mine.
I have to admit that I was a bit shy, because I understand few words in Japanese. Anyway everybody was very kind with me and even from a short Keiko I think I got something on which I have to work. I realized that I am pushing very little with my left foot and the power is non coming from the hips. Furthermore, the tip of shinai should keep the center after kote.
It was also amusing as Ishi and his friend Ikui were completely different wearing the bogu. They were quite shy with me, also because of the difficulty in speaking in English, but with the bogu the became really two tigers.
Now I go to sleep, let hope to be fresh for an other day of Kendo adventure in Fukuoka.
......
March the 16th
The beginning of the day was quite complicated. Took me quite a lot to figure out which train I have to take to get to the Fukuoka Institute of Technology. Actually buying a ticket and finding the station were get off was fine, but the labels with the trains switch from English to Kanji very quickly and the station indicated on the label is the terminal one, at the end I asked to a person at the gate and finally I detected the train. Last problem was the lack of English labels into the train, so I had to be very careful at each station to be sure to get off at the right one.
Finally, I managed to catch the train and get off in Fukodai mae. Meeting registration was easy since it was in English :-)
Later in the afternoon, I meet Sumi Sensei at the FIT, we had a very good tempura together and we went visiting the Raizan Sennyoji Dai-Hihouin temple. 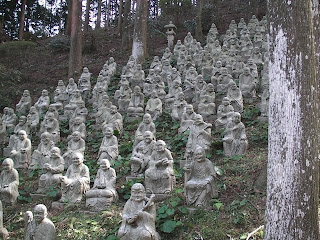 It is the only Buddhist temple remained out of those initially present in that area. It is characterized by the presence of a very big Budda (16 feets tall) made of wood from a single camelia tree. In the temple there are also 500 statues of Budda.
After this visit I went to the Kendo shop of Tashiro Sensei to get a Keikogi for my 10 years old sun. Tashiro Sensei make very beautiful bogu and he showed me old bogu belonging to Sumi Sensei and Chiba Sensei. After this we moved to Karatsu town and we went in a private dojo to practice Keiko. The wife of the Dojo owner offered us a very good green tea and we get ready for Keiko. It was an amazing night all the participants had many more Dans that me but nevertheless I made Keiko with any of them and got from them useful hits. For example, I realize that when I make men my left hand is not perfectly straight and the hit it is not precise.
Also Tashiro Sensei joined the keiko, but unfortunately I do not know the names of the other Sensei present at the Keiko.
It is extremely nice to practice with somebody that has a grade much higher, everything seems so simple in their hands but it is not true at all. Actually after this Keiko, I started trying to use the "Seme" to make men, trying to imitate an action that I have seen many times on me during Keiko.
When I receive a seme-men I realize that the opponent is invading my space, with Seme, but I cannot get the center anymore and I catch the men on my head. However, when I try doing seme-men the number of successes are about 1 on few dozens....I have to work on it.
At the end of Keiko Sumi Sensei took me to an hot springs, it was fantastic, we stayed in water not too hot and all pains residual of the Keiko disappeared. I have no words to thanks Sumi Sensei for that beautiful night in Karatsu.
....
March the 17th
As suggest by Sumi Sensei, I have contacted Honda Sensei, which is Associate professor of Health and Phisical Education at Fukuoka University, because he is responsible of the Syobukan, the Kendo dojo of the University. Since there was the graduation party of some of the Kendo students we had not a lot of time for Keiko. In Syobukan, I met again Ishi and Ikui that are practicing there. We did just 30 minutes of Mawarigeiko after a worm up. Students are very strong and fast. It was really a pleasure trying to catch them although it was very difficult, I had really a lot of fun.
The picture show the people involved in the Keiko, Honda Sensei is the one with the brown Do. 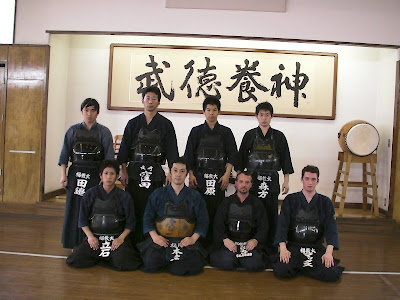 I met also Max, last person on the right of the picture, a British post-doc student that took one year work holiday to practice Kendo at Syobukan.
After the Keiko there was a shai where all graduating students have to fight against the rest of the Dojo. It was an experience to watch them fighting. After, Sumi Sensei was so kind to invite me to join the graduate party. It was really fun, good Japanese food and a lot of beer.
Tomorrow is the day before my presentation at the meeting and I have still to make some revision to my presentation but I will also take the last chance to make again Keiko at Syobukan.
....
March the 18th: Last Keiko in Fukuoka.
Honda Sensei organized a Keiko at 14:00 at Syobukan. This time no problem to catch the right train but some problem to find the Dojo. I asked to a very king Japanese woman in the University and she kindly took me there. Japanese kindness is incredible!
Back to the Keiko, eight students participate to it, I have to thanks them very much since the night before they had a very long graduation party with karaoke. Nevertheless, they were so fast in the keiko!!!!! We did a worm up, one round of kirikaeshi and 8 x 4 minutes mawarigeiko. I think my body is improving, I was sweeting a lot but I finished without being completely destroyed. I really had a great fun! I was very sad to leave the Dojo but this is life. On my way back to Hakata station I met also one of the students participating to Keiko, he spoke with me in English during all trip to Hakata. However, he did no say any English word to me in the Dojo, I think he was very shy of his English but he managed very well on the train, I think he needs only some more exercise.
I had four wonderful Kendo days in Fukuoka, the hospitality of Sumi Sensei was really amazing. Furthermore, practicing with many Sensei, and with Honda Sensei and his students at Syobukan I have collected many useful suggestions and informations to improve my kendo. I will get back to Italy with many thinks to put in practice during the kendo session at my Dojo.
This ends the Kendo part of my visit to Fukuoka. Tomorrow, I have my presentation at IIBM and many other interesting talks to listen.
Before ending a tip on the parquet in Japanese Dojo. They are very different from those where I am used to practice in Italy. Usually in Italy, we practice on parquet used for basket and volley ball. Parquet in Japanese kendo Dojo are more flexible and strong fumikomi is not painful.
....
March the 20th: Yagi visiting Yoshimura Sensei.
I arrived this morning in Osaka and my friend Chisato pick me up at Itami airport. After dropping the laggage at the Hotel and having a light lunch we moved to Yagi, the town where my friend live. Chisato introduced me to Yushimura Sensei, which practice Enshinryu. We spent together an extremely interesting half day. He introduced me to the Enshinryu which is a combination of various martial arts with weapons, i.e. sword, bo, etc., and with bare hands. If I have understood well the philosophy underlying this martial art is the detection of the early movement of the opponent and a counter action, with a lot of usage of taisabaki. He showed me some of the ancient kata with the sword and he was so kind to show me is old sword. He told me that the kata he is practicing were developed to allow fighting into the narrow streets of Osaka. Actually it was impressive as he could extract a long katana when the opponent is only at 30-40 cm distance. He also how me some techniques with the bo. It was a very interesting afternoon. After we had dinner together. It was a very pleasant dinner with a lot of talks and a very good shabu shabu. I have to thank my friend Chisato for the opportunity to meet such interesting person.

Posted by Kendomaniac at 9:52 AM 2 comments: