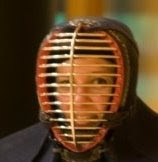 Any time I add a new visit to this blog I realize that I am very lucky to have the opportunity to meet and practice with many Kendokas all over the world.
This time I am in Stockholm for the ISMB/ECCB meeting. I have contacted Micaela Ahlstam (picture on the left) which is one of the instructor of the FSKA Dojo in Stockholm.
I arrived in Stockholm on Saturday June the 27th and the visit to the summer training at FSKA was scheduled on Wednesday July the 1st. I was quite lucky because the weather was really exceptional clear sky and 27 C, nearly incredible! The meeting was very interesting but during these days in Stockholm I was really looking forward to practice Kendo. Yesterday night I went to the summer location of the FSKA Dojo (picture below) 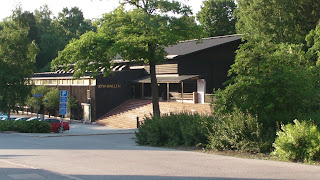 and, getting out from the underground, I met an other kendoka that was so kind to introduce me to the people in the Dojo. I also knew from him that FSKA is the largest Dojo in Sweden.
We started the training with a basic suburi and than we put the men and started a long session of various version of kirikaeshi. I have to admit that this was the most exhausting part of the training. After we practiced big and small men and kote. After the first 45 minutes we had a break of 3-5 minutes and I had the chance to meet Isak,

a kendoka that was fluently speaking Italian since he spent some years in Firenze and Milano studying and working. It was also amazing to know from Philipp, an other instructor of the Dojo, that he started Kendo in Heidelberg and he knew some of the people I met during my last visit to the Heidelberg Kendo Dojo. After this little break we did something quite interesting: it was a competition on being very quick in wearing the men. After wearing the men we aligned, in the center of the Dojo, on the basis of the time needed to put the men on . Then the person that was the last in wearing the men started to do three times men on the second person and so on till the end of the long line of persons. In the mean time also the second last person started the three men and so on till every body had finished the men series. It is an interesting way to speed up the men wearing. It can be very exhausting making that long series of men when in the Dojo there are 20 or 30 persons!
After we practice some iki techniques and then there was the free gigeiko with the experienced persons. I had also the possibility to make a brief gigeiko with Micaela. After we did mawarigeiko and the training ended.
I was quite exausted but very happy. I enjoyed a lot the training and the people and I hope to be back in Stockholm to practice again with them.
Posted by Kendomaniac at 8:17 AM 1 comment: