This time I am in Rome for the report meeting of the EPIGEN project. It is very rare that I can spend few days in Rome, although my brother is living there. Since train/flight connections between Torino and Rome are quite good , usually I do business work within the same day. This time, since I am here for three days I took the chance to visit Accademia Romana Kendo.
It was a nice night!  Everybody was very friendly wiht me, as in general happen everytime I visit a new dojo.
I met all the instructors of the club. The training started with two groups, one doing kata (people preparing for exams) and an other group that was doing the warm up. Mauro Battaglioni was driving the warm up and he did a great job. He organized the warm up in a very efficient way starting from the legs and moving slowly up to the upper part of the body.  After we did basic suburi, training was driven by Carla Liberto. She did a very good work too. Her part of the training is, in my opinion extremely useful for beginners to make them able to cohordinate the ashi and arm movements.
In the mean time other two groups made men tsuke and work in parallel with us: competitors and persons preparing exams. Later, I joined the persons preparing the exam and I did some jigeiko with them. I also had jigeiko with Enrico Banchetti.  He has a great kote, he catched me many times and I have to reflect about it to understand why my kote was so accessible.
At the end I had a nice surprice, I had a brief round of shai with all the instructors of the dojo. As I usually do when I practice shai I moved to jodan no kamae. All shai were very challenging and I managed to strike some points but I lost all the fights. It was a pitty but it will help me to improve my jodan keiko. For sure a big problem is my kote, it is too easy to be detected it. However, at the present time I do not understand which is the error, and I have to work on it. Furthermore, I have to construct more to get an effective men from jodan no kamae.
Well I have some work to do for the next few years ^_^.
Great time at  ARK!
Posted by Kendomaniac at 4:17 PM No comments: 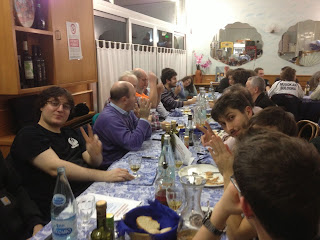 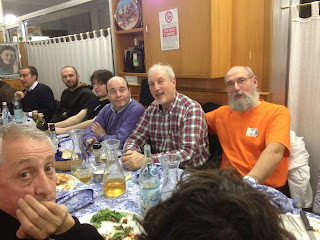 In the second day in Bologna I went to the Seishinkan Kendo Club. I went there already once but I did not have the possibility to meet Stefano Betti (roukku Dan), the instructor of the club. The training was very interesting, we had a lot of suburi and a lot of exercises to find the correct seme posture. At the end of the training Stefano was so kind to bring me back to the hotel.
An other nice night of kendo and an other little step in my kendo trip!
Posted by Kendomaniac at 12:40 PM No comments:

I have been so lucky to be back in Singapore for a reasearch meeting 2nd NGS Asia Congress 2012 and for a seminar at the  SIgN A-STAR Institute. As usual it was a great experience both for the scientific an social view. My stay was brief but characterized by very intense working activity. However, I managed to practice Kendo again at the Singapore Kendo Club. I was at the Sunday training and at the Thursday training. The two training take place in tow different Japanese schools in Singapore, the Changi Japanese School, 11 Upper Changi North Rd and the Japanese Primary school, 95 Clementi Road.
The Sunday training started with about 30  minutes of kendo-no-kata and Yeo sensei offered his advise to me on the kata hihglighting some tips expecially for the kodachi katas. After we make directly men-tsuke and we started with few rounds of kirikaeshi. Suresh, one of the components of the Singapore Kendo National team, run the training. We focus on main basic techniques, and after we had the possibility to practice jigeiko with the various sensei present in the dojo.

Thursday was more hard. I was in dealy because of the working schedule, taxi was not available, I took the underground, but the station were I when out was not exactly very near to the dojo. Finally with a taxi I managed to get to the Clementi Dojo.
The Dojo is little but the participants are alt least shodan. Also here Suresh run the training that was particularly heavy for be because there was no air conditioning and this affected a lot my performances. . After basic kion we had few rounds of Jigeiko that was very challenging for me. I was not very satisfied of me I could not find the right timing and my seme was very poor and it was very very hot!

At the end of the training a asked for some advice and I one of the Japanese sensei told me that I have a kendo base is good but I have to trust more on my kendo. Suresh told me that I have to be more carefull in the attach because men and kote attachs are different and the opponent recognize them.
Although I have not been good as I wanted the training was very useful and I enjoyed very much.
Next year it quite possible that I will be back in Singapore and I will ask Yeo sensey for the possibility to participate to the training also in the University dojos, I not so sure it will be possible but I will ask to have the possiiblity to cross the shinai with other  kendokas. 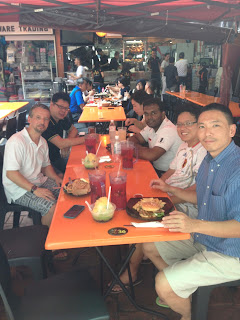 Posted by Kendomaniac at 12:03 PM No comments: