Also this year I managed to participate to the Core lab Directors meeting organized by Affymetrix. It is always a very good occasion to be updated on microarray news. This time the meeting was held in Munich (DE) and I was one of the invited speakers and I presented our recent work on exon array data analysis.
As usual when I visit some country I try to practice Kendo in local dojos. I contacted various dojos but I was unlucky because the first week of November is part of the autumn school holidays and many dojos, that have their practice in School gyms, are closed. However, when I contacted Kendo Munchen e.V. Dojo, it was nice to know that there was the possibility to do some keiko even during the holidays. Therefore, in November the 5th I visited Kendo Munchen e.V. Dojo. The dojo is located in Halle der Rudolf-Diesel-Schule in Schulstraße 3a 80634 München-Neuhausen. It was very easy to get there by underground.
I have to say that I was a bit worry to follow a full lesson in German. Although I worked, long time ago, for 3 years in Germany I have only a survival German, enough to understand what I am ordering at restaurant and how much I have to pay. However, Germany is a country where many people speak English. Bane, the person I contacted by email, told me to introduce myself to the person running the keiko. He is the toll person with the grey hairs (yellow arrow) you can see him in the picture I have borrowed by their Dojo web page. Later I knew that his name is Hans and he has founded the Dojo 28 years ago. 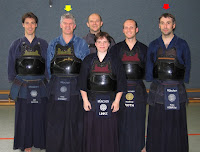 I got there at 18:30 and we have an open katas session. I did my practice with a beginner on the first 3 katas. I think I managed to give him some advice and it was easy because he was speaking English pretty well. Half an hour later the men in the picture, indicated with a red arrow, run a worm up session. There were a lot of Kendokas, roughly half with bogu and the other beginners without bogu. During the worm up we did basic suburi like Zenshin kotai men, Zenshin kotai sayumen, etc.
Subsequently, we make the salutation and wearing the full bogu. At this time the training was split in two groups, beninners and bogu people.
We run kirikaeshi few times, and we started some kion. Initially we had a series of big and small men attacks, then we worked on iki men and debana men. We also run complex series of attacks and this was the most critical point because due to the german language, noise and complexity of some of the kion series I got a bit confused. Subsequently we had more than half an hour of mawari-geiko and it was very nice because I had the chance to practice nearly will all the kendokas. Some of kendokas were really very tall and for a 1.63 meter person like me Jigeiko with them was quite challenging. I try to follow the suggestions of Olivier the Sensei of Budokan Lausanne Kendo Club. He is about 2 meters tall person and when I made jigeiko with him he told me that I have to try to force the opponent to lower down his kamae and practicing attacks like kote and do since men can be difficult to rich for me on a tall person. However I realize that I have some work to do on kote since, as it was highlighted by the instructor of the Munich dojo I have a reasonable men even on tall persons but my kote get only the tsuba, it is too slow and predictable. I managed to make a couple of nuki do but the timing is not perfect, yet, since I was a bit slower that the men attack.
After the mawari-geiko there was free Jigeiko and I practice with Bane and few others that I could not meet during the mawari-geiko.
The overall impression of the training was very good. The main limit was the language that did not allowed me to interact deeply with the other kendokas. They have a very clean Kendo and due to the nice friendly atmosphere I enjoyed a lot to practice with them.
I hope to join again their training in case I will travel back to Munich.
Posted by Kendomaniac at 9:21 AM No comments: