May 2009: Children Kendo training at Lancini's Dojo, Brescia (I)

This time I have visited Lancini's Kendo Dojo (Sei Chu Do Dojo) in Brescia. This trip was not linked to one of my business trips but it was due to my interest in learning more on the Kendo training for children. The Sei Chu Do Dojo has a training session only for children on friday. The training is held by Mrs Yoon Sook Ma (4th DAN), 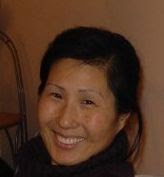 I met Yoon Sook, for the first time, during SUMI's seminar at Shubukan. She, Livio and Jun, their son, participate to the seminar and I hear about the nice work Yoon Sook is doing to train children in Kendo.
I then asked if I could come, with my sun, to participate to one of their children trainings. On friday May the 22nd, my family, together with the family of my instructor, Walter Pomero (7th DAN), went to Brescia. The Sei Chu Do Dojo is located at liceo scientifico N. Copernico
via Duca degli Abruzzi, 17 (ingresso da via Balestrieri) Brescia.
The training started with the rei and at that training participated a total of 8 children, including Lorenzo (my sun) and Sasha (Pomero's sun).
All the training was organized in a way to make Kendo exercises as a game.
They started the foot training to synchronize feet, with hand movements and kiai. Initially the exercise was done without shinai and then with shinai.
After they made a nice game to improve synchronization. Children were in a circle keeping their shinai parallel to their bodies with a finger on kensen. When Yoon Sook was giving the ajime they have to leave their own shinai an catch the one of the child nearby.
After there was the training for MEN. Children were organized in couples, one in front to another, and motodashi keeps the shinai parallel to his body and the other child has to hit slowly the kensen of motodachi shinai, with a large MEN movement. Then, children were organized in two rows and, for each row, the instructor throws slowly a ball in front to a child and he has to hit the ball with the shinai doing a quick movement with his wrists, then child move to the back of the row and game continue with the second child.
After there was the DO training the instructor was keeping, like a flag, a tenogui and when the tenogui is left the child has to hit it. The child has, as start position, the shinai placed on the left sholder, an example is give in the picture below. 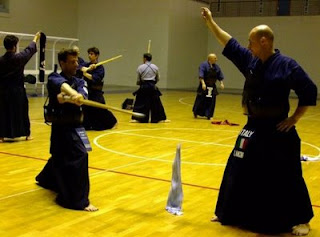 An other exercise was made to understand when the opponent is attaching by looking on his eyes. Children are located one in front to another and motodachi keeps a tenogui parallel to the floor on his open hands. The opponent rises his hand and looks in motodachi eyes. Motodachi has to understand when the opponent is trying to remove the tenogui from his hands looking only in the opponent eyes and closing the hands to keep the tenogui.
All the training was done with a reasonable amount of happy caos, which is an important part of children life, never the less Yoon Sook was able to make children doing all exercises.
At the end of the session children put on the full bogu and they did a brief gigeiko between each other.
As last exercise various adult motodachi were collected and children did on them a DO slalom.
Training finished with the rei.
It was really a wonderful night. My sun was absolutely enthusiast of the training.
Mothers took care of dressing the children and after they all went to a nearby pizzeria. In the mean time Pomero, her wife, Simona (3rd DAN) and me joined, for half an hour, the mawarigeiko for adults. I managed to practice with Lancini, with an other guest from Milano (6th DAN) and with part of the people of Lancini's Dojo. As usual gigeiko was exiciting and exhausting. Making gigeiko in an other Dojo it is always an occasion to find some weak points in my Kendo. This time I realized that, when I am in tsubazeriai, I lack completely in protecting the men from opponent attach, I have to work on it.
In autumn, I hope to organize again a trip to Brescia with my sun.
Posted by Kendomaniac at 7:47 AM No comments:

On my second day in Heidelberg I joined the Kendo practice at the Ken Zen Kan Dojo.

I have to admit that, even if I like a lot practicing Iaido, I feel more comfortable when I enter in a Kendo Dojo. This happened also at Ken Zen Kan Dojo, with the other advantage that many persons were speaking English and I meet also two Italians. I was also very happy to know that my German understanding is sufficient to practice Kendo :-)
It was nice to see that there were also many beginners, that are important to make a Dojo growing.
The training started with a warm up followed by a quite heavy suburi.
After we put on the men and started kion focusing on zanshin, practicing big men, kote and focusing on the right way to make do. After we move to counter attack techniques: kote-nuki men and men-nuki do. The lesson passed very smoothly and we finished with mawari geiko. This was an extremely enjoyable part, very clean and challenging fightings. At the end I did keiko with Frank, the Iaido instructor, and he is a nito user. This was a nice opportunity to test my jodan. It is about an year that I am practicing jodan, as side training in Torino, but I am quite a beginner, however to fight against nito in judan is really difficult, therefore I switched to jodan. It was a nice fight, difficult to find space within the nito but interesting and enjoyable. At the end of a refreshing shower the President of the Dojo was so kind to bring me back to the EMBL Hotel.
It seems that it is possible that I will be part of other workshops in Heidelberg and it will be a great opportunity to practice again at Ken Zen Kan.
Posted by Kendomaniac at 2:10 PM No comments:

This time I am in Heidelberg for the EMBL/Affymetrix workshop. It was a great pleasure to be back at EMBL not as a student but as instructor. The first day of workshop was very interesting and students interact a lot during the various talks.
At 6:00 pm I left EMBL to go practice Iaido at the Ken Zen Kan Dojo. This is the first ime a practice Iaido in a other dojo. It was a bit difficult to find the Dojo but at the end I succeded and I was lucky to meet Frank Gottschalk, the Iaido/Kendo instructor, just out side the Dojo. Frank speaks fluently english and he was so kind to make the lesson both in German and in English.
We practice Seitei and he also highlighted the presence of similarity/dissimilarity between Seitei and Muso shinden. The lesson was very interesting but I realized that I did not manage to give my best.
He highlighted the fact that my cut is still too small, but I have a reasonable timing. Never the less I could do much better.
At the end of the training he was so kind to bring me back to the Hotel and during the trip he said, a very important think. I was saying that I normally practice Iaido focusing in removing my mistakes. He said that it would be better to make all possible efforts in understanding how the technique should be correctly done instead of focusing on the removal of mistakes. He said that this positive way of looking at Iaido is more efficient than simply trying to detect and remove errors. I like this idea and I have to work on it.
Back at the hotel I still managed to have a kebab and a fresh beer even if it was quite late at night.
Tomorrow I will have and other interesting working day and at night I will go practicing Kendo with Frank.
Now it is time to switch off the light and get ready for an other day in Heidelberg.
Posted by Kendomaniac at 11:11 PM No comments: