This time I am in Paris to describe some of the work we have done on microarray meta-analysis on the meeting of the EADGENE European network of excellence. It is really a pleasure to be here, meeting is interesting and Paris is a beautiful town. Although I have some problem with my broken French, which is only enough to understand what I am eating.
The meeting is taking place at Muséum National d'Histoire Naturelle, which is really a beatiful location. 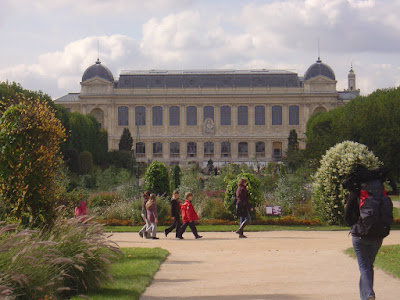 Few weeks ago I contacted Dominique Aufroy to visit the BUDO XI dojo. I am going there tonight to join the training for yudansha directed by Yoshimura Sensei, 8th DAN Kyoshi, and J.P. Labru, 7th DAN Renshi.
I will do my best during the training even though I have some residual pain of the cold I catch last week end.
In few hours I will be back to continue the story....
... I arrived to the Dojo, which is located in a multifunctional sporting center, half an hour before training began. 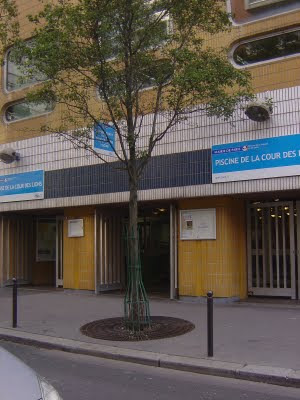 Fortunately the
person at the reception was speaking a bit of English and he shew me where to go. Going to the second floor I realized that kendo was there since I started to hear the noise of kiai and fumikomi. When I arrived there was the session of the children, which were quite a lot. I was waiting for Dominique but since I have not seen her I asked to one of the other kendokas, waiting for the training. He shew me the person to introduce myself. At this point I wear the bogu and got to the first floor where all the others were waiting for the training. I was also introduced to Mr. Labru. The practice took place in a dance room with a very flexible floor, ideal for fumikomi. The room was relatively small and we were more then 25 persons. After a brief warm up we did basic suburi: jogeburi, nanameburi and choyakumen. Subsequently we did the rei and wear the men.
The lesson was held by Yoshimura Sensei. We started with Kirikaeshi followed by Do kirikaeshi. In the Do kirikaeshi the second round was done not as in the linked video but making, at judan level, the catch of the shinai by motodachi. After Yoshimura Sensei demonstrated the men attach in four steps:
Subsequently Yoshimura demonstrated kote-men in four steps:
After this kion practice we did 30-45 seconds kakarigeiko changing motodachi.
After the experienced persons, e.g. Yushimura Sensei, Labru Sensei etc., wear their men and we started gigeiko. I was very lucky because I was in the line for practicing with Yoshimura Sensei. As usual when I practice with such high level person I feel completely inadequate. However I did my best to strike some good attach but with very little results.
After I moved to an other line and I fought with a very tall person, I apologize but I forgot to write down his name and I do not remember it. That was a challenging gigeiko, his kamae was very protective for the kote and I could not manage to find any opening. I tried the suggestions I got sometimes ago from Olivier Perrenoud, 6th DAN, the instructor of the Budokan Lausanne Kendo Club, to induce the tall opponent to a kamae suitable for me but I did not managed. The only things I could try were uchi men and debana men which were not effective since he was arriving always before me. After I fought with a person using nito, if I do not mistake should be Mr. Dupon. It was an occasion to test my Jodan. I am practicing Jodan kamae since last year and normally with persons with experience greater then me I do not use it because I have still many things to learn in judan no kamae. However, figthing against nito in judan is really a nightmare, instead jodan kamae has the advantage that distance is greater. Mr Dupon uses the longer sword with the right hand which is actually increasing the complexity of the fight, at least for me. Never the less it was a very interesting fight. He hit my right kote many times and I could not realize how he did, until he explained it to me in front of a beer at the end of the training. He told me that he was focusing my attention on the left hand short sword and therefore I could not realize that he was attaching me with the right hand. I have already fought in jodan against nito but Mr. Dupon was using many different kamae that were making very difficult to hit him. He also shew me that the only open side would be DO and he allowed me to try it. I have to store this information for the next time I will fight against nito. At the end I probably managed to hit him not more that a couple of times but it was an enjoyable gigeiko! Speaking in front of a beer he also told me that I have to imrpove my seme doing Jodan because without seme Jodan is very weak. Unfortuantely before I managed to practice with Labru Sensei the two hours were finished :-(
I took a shower and I joined the other people of the dojo for a quick beer, I was absolutely thirsty!
Posted by Kendomaniac at 4:59 PM No comments: