I am in Antwerp in Belgium for the EORTC-PAM Meeting till Sunday morning.It my first time in this Belgium town. 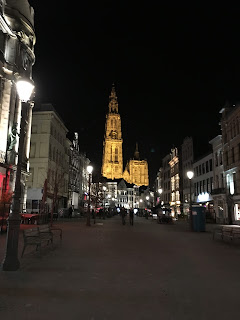 Yesterday I was at SeiShin Kan club. Being a kendo addicted I could not miss the possibility to visit a club in a town were I was for the first time.
Yesterday I had a very busy day, I wake up at 4:30, catch the flight to Brussel via Frankfurt and the a train to Antwerp. At 2 pm I had my talk at EORTC-PAM Meeting.
It was a very long day, but I was waiting for the evening training at Sei Shin Kan. Marco Heylen, 3 dan, was so kind pick me up at the hotel and to lent me one of his shinai. The Sei Shin Kan club that is located in the gym of a school (very soft wood floor!). There I met Stefan, 5 Dan, that run the club. 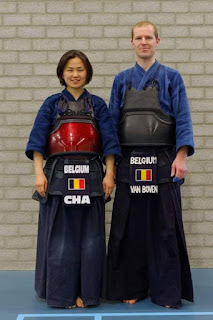 We had two hours training: warm up, suburi, kion and jigeiko. This is one of the occasions where I realize that,  in our dojo, we do not have enough time for practice, only 75 mins.  The two hours definitively allow a more rich training. We were about 10 persons on the practice. It was a very nice time especially the Jigeiko. Stefan, his wife Cha and Myoshi are very strong fighters!
As always happen to me when I practice kendo I was totally grab by the practice and the two hours training flied away. 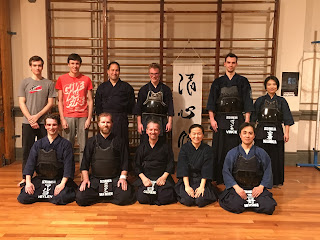 After keiko we had a beer in a bar near the dojo and we had the time to talk, not only about kendo, but also on politics and the actual European situation. It is a shame that I have a flight very early on Sunday, in the other case I would have joined the Sei Shin Kan Sunday training. I was very glad to met Sei Shin Kan people, I have an extremely pleasant evening and I slept like a baby ^_^ back at the hotel.

Posted by Kendomaniac at 11:21 PM No comments:

In January I was for the first time in Patras, a nice Greek town facing the Ionio Sea. I was invited by the Medicine school of Patras University to run a brief course on the new sequencing technologies and the analysis of data. It was a very nice time,  I had a lot of people listening to my course,  asking questions and discussing about the technology.
As usually happen in my trips, I was looking for a Kendo club and, in Patras, there is a  club called Kenkan. It was a bit difficult to find it because of the greek language, but I managed to get in contact with Spyros, an enthusiastic  3 dan, that run the club. He was so kind to pick me up at the hotel and, driving to the club,  we had the possibility to talk a lot about kendo. Spyros is really a great person very committed to improve his kendo and to make the Kenkan dojo growing. 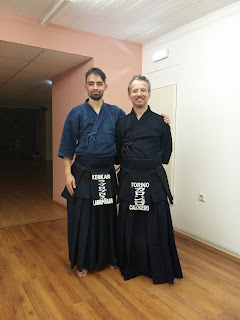 The kendo community in Greece is small and it takes a lot of effort for the Kenkan people to  participate to seminars and competitions. The majority of events are in Athens and it takes  more than two hours by car to go to Athens from Patras. The dojo is located in a nice multi-functional private training center. The club is about 10 persons and I had the chance to meet 5 of them. The practice was based on warm up, suburi, kion and jigeiko. The students are young and very committed to improve their kendo. 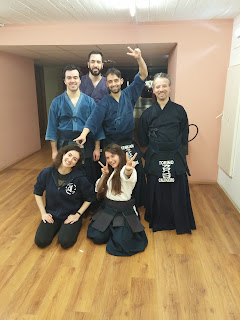 Since we had two hours practice I had the possibility to practice kion and jigeiko with all of them. I liked very much their kendo, all students independently by the level showed a good posture, the techniques were very clean.
I would like to underline that this is the first time I do some comments on the student practice, because Spyros ask me for comments after the keiko.
The practice at Kenkan remind me what  my sempai, Luca Villa (6 Dan), told me when I was at the very beginning of my kendo practice. It was a Saturday and it was probably 6 months that I started kendo. Doing jigeiko with Luca, I was getting frustrated because he was always striking with ojiwaza, and I was unable to finalize any attach. So I started to stop his attach, after a couple of times that I was stopping his strikes without responding with any ojiwaza, Luca told me that stopping strikes without responding with ojiwaza was not improving my technique and he could not improve himself. He told me that at my level the most important point was finalize a strike, even one over 10000 would be a success. Practicing at Kenkan I have seen that all students were doing correctly their job: clean attach and they never stop an attach unless they were  trying to respond with ojiwaza.
It was a very nice evening, good kendo!
I was also very happy that we could spend some extra time  taking about kendo in front of a beer! 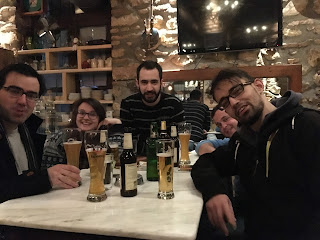 Posted by Kendomaniac at 10:30 PM No comments: