I was in Singapore only for four days about 4 years ago. Now I am back for a full week. 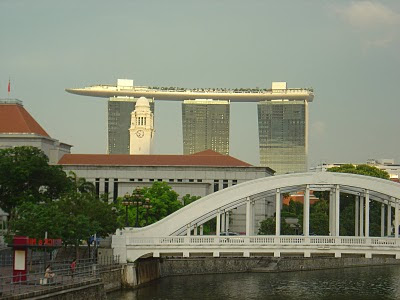 I have a talk at the 1st BIT Neuro Talk meeting but I also took the chance to visit the Singapore Immunology network (SIgN) , which is a big department under the direction of prof. P. Castagnoli. I will also make a talk there and I will have the possibility to talk to many researches hoping to set up new collaborations. Prof. Castagnoli was very kind since she advertised my arrival in other institutes therefore I will also make an other brief talk at the Bioinformatics Institute (BII).
So, these are going to be very busy and interesting days.
I arrived at Singapore airport on the 22nd perfectly on time, thanks to Lufthansa precision. Weather forecast were giving raining all over the week but I was lucky and I did not got, till now a sing drop of water on my head. From airport I when to my hotel, that is in the centre of the town. On 22nd evening I had dinner with my friend Francesca, which is the director of a microarray core facility in Milan but she has very tight collaborations with SIgN groups. We had one of the Singapore specialities: chili crab. Actually we have eaten a 3 Kgs steamed crab covered with spicy chili sauce. It was delicious although quite complicated to be eaten since chop sticks are not very useful to handle a crab. 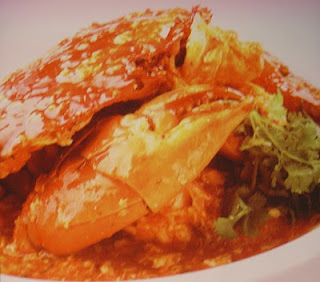 On Wednesday the 23rd, I was all day at the SIgN to make an introductory training to young bioinformaticians on microarray data analysis. I finished the training at 5 pm and I rushed back to hotel to go to the Singapore Kendo Club. I used a combination of underground and taxi to manage to arrive on time, since traffic jam is a critical issue between 6 to 7 pm in Singapore. I arrived at the Dojo at 6:50 pm, the dojo is located in the Japanese School at 11 Upper Changi rd. The training is both for people with and without bogu. After a brief worm up all together, Mr. Zafar, I was in contact with him to join the training, and few other instructors supervised the training of the beginners. Instead persons with bogu put the men and started the training.
We started with few rounds of kirikaeshi, followed by few rounds of big men, kote men, men taiatari men. After, only person being at least 3rd dan were motodachi for uchikomi geiko made of the following set of techniques, men, kote men, men taiatari men, do, men, repeated various time depending on the kakarite level and errors. After, we started jigeiko with the same motodachi. I managed to do jigeiko with a very skilled lady. She highlighted a problem I had with my foot work. To make a longer step instead of pushing with the back foot I was using the front foot to grab extra space. I tried to correct the movement pushing with my hips but I was not satisfied of my jigeiko. After I did jigeiko with Mr Douglas, that have already met in my previous trip, and with other two students. It was a very nice experience, very clean kendo.
Unfortunately the time was ended and I catch a taxi and got back to the hotel for a quick shower and a snack with my friend Francesca.
Next day I went to make the registration to the Neuro Talk meeting and then I got back to the hotel to refine the presentations for the Neuro Talk meeting and for the SIgN. At 5 p.m. I start to pack every thing to get to the kendo training for advanced students (above 2 kyu). The training took place to the Primary Japanese School located on 95 Clementi Rd. 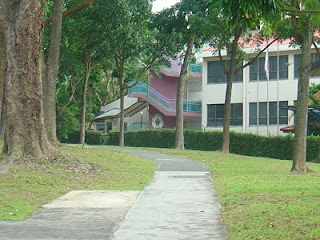 I was, as usual, worry about the traffic jam and I arrived too early so I had to wait about an hour before seeing somebody with a bogu walking to the school. I asked him the favour to get together to the dojo. Speaking with him I knew that few months before Sumi sensei and Honda sensei were in Singapore.
This dojo is much smaller than the one I was the day before and it does not have air conditioning. At 7.30 p.m. we started the training under the supervision of sensei Kameyawa. We started with basic ayumi-ashi foot work with out the men. Then we put the men and we started kirikaeshi and uchikomi techniques. Particular interesting was the work sensei Kameyama asked us to do on little men. We had to try to find the right time to cut putting zanshin in the technique to have powerful men. This training was very useful to me because I forced myself to remove the error of the night before: pushing more with my hips and my back foot. We also practice kote-men and tsuki. Particularly interesting exercise was also the training on the combination tsuki-men. The sensei highlighted that the men technique can only become an ippon if the tsuki is effective, so only in this case there is the time to make and effective men with the right distance. We also practised a set of taiatari combinations: men-taiatari-men, men-taiatari-kote, men-taiatari-do.
After the uchikomi I was completely wet. After we did jigeiko. I had the chance to make jigeiko with Kameyama sensei and again with the lady I met the day before. I try my best to make a clean jigeiko with both of them. After the two jigeiko, due to the temperature, I was quite exhausted and wet so I had to rest a bit because I was nearly unable to breath. The training finished again with kirikaeshi.
I was exhausted but happy also because the lady told me that this time my men were done correctly.
I packed everything and said bye bye to everybody and I catch a taxi to get back to the hotel. the the usual routine, snack beer and sleep.
Friday it was again a long but interesting day in which I did my talk at SIgN and spoken with many researcher, I got a lot of congratulations for our work and I learned a lot from them.
Today I was at the Neuro Talk meeting that was not as good as I expected, however, I got a lot of question about my talk. In the late afternoon I joined Francesca and other two local friends, Peggy and Josephine, for dinner. We went to a Chinese restaurant and we tried the hot pot. It was absolutely delicious. 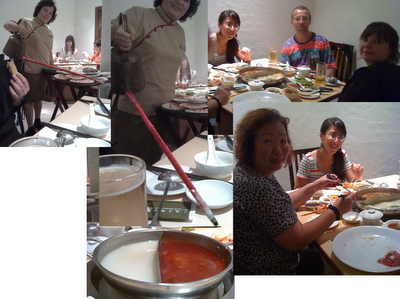 Tomorrow is Sunday, I will go to the Neuro Talk meeting first and then to visit Setosa island. 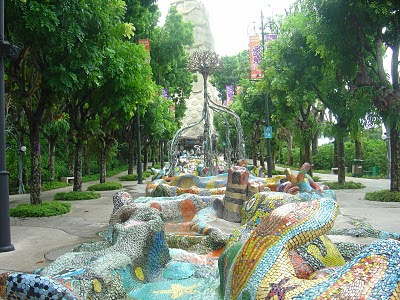 Monday again to SIgN and BII and then I will fly back to Italy. My only regret is that I could not practice kendo on Sunday since at Singapore Kendo Club there are the middle year grading session. I hope to get back again in Singapore it was a beautiful experience both for the work and for the kendo.
Posted by Kendomaniac at 4:52 PM No comments: