Although Sicily is the place where my father was born, for a long time I did not want to go there. When I was a child I was visiting my grandparents in Comiso, a little town quite far away from the sea, and I only remember that I was unable to understand the local dialect and it was very very hot!  On the basis of this memory Sicily did not seem to be an appealing place to be visited. About three years ago my sun strongly wanted to go in holidays in Sicily to see the place where his grandfather was born. So we when in holidays in Noto, a wonderful baroque town in the south of Sicily, and I got completely conquered by the place, the sea, the food, the people.
At the beginning of this year May I went to Catania for the meeting of the Bioinformatics Italian Society (BITS). It was a good occasion to get back in Sicily. I had a talk on the second day of the meeting and off course I took the chance to practice kendo in Catania.
Kendo in Italy is spread from west to east in the north part of Italy, with a lot of dojo. Moving from North to South, dojo are reduced and, below Rome, you have to jump to Sicily to find other kendo clubs. In Catania it is located the Kuma No Kai club. The Kendo dojo is located in a fitness club in Gravina di Catania, Orient Fitness. The instructor of the kendo club is Junio Borghese.

I knew the club because I crossed my shinai twice, at the Italian Kendo Championship, with one of the senior students of the club: Giorgio Masaru. I have a very nice feeling about the shai with Masaru because it is a clear example that highlight the fact that kendo fight can be done even if there is a very big difference in size between the two opponent. This is actually the case for me, 160 cm tall, and Masaru about 190 cm. Shai with him was challenging expecially from the mental point of you and in my opinion it was not so important to win or loose but putting all my effort to keep high my spirit. 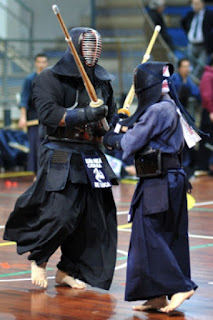 Since Masaru is a very kind person, I contacted him to have the opportunity to practice at their dojo. Since the dojo is not inside Catania he kindly offered me a lift to the dojo. He picked me up at my hotel at 18:00 and we got at the Orient Fitness in few minutes. As tipical of Sicily behavour, everybody was very friendly with me and I met Junio and Orlando, which is in the Italian kendo team for the incoming World Kendo Championship, that will be held in Novara.
The dojo have a nice floor for kendo, but the mobility is a little limited by the presence of two pillars in the middle. Never the less people is well trained to have a clear idea of the available space during the practice.
We were about 15 persons with the bogou and 4-5 persons without. Junio and the senior students took care of the training of the people without bogou in a way that they could practice also  with the people with the bogou. I had the sensation that they are a very tight group that know very well how to run efficiently the training. We started with a warm up with Orlando and after mentsuke we did few round of kirikaeshi, big and little men. Then we had a long session of mawarigeiko. The dojo follows the Korean Kendo approach, they work a lot on shai optimization and everybody I met show a very high spirit in the fight. It was challenging, I only stopped once but it was very hard expecially with Orlando and Junio, which are very strong fighters. 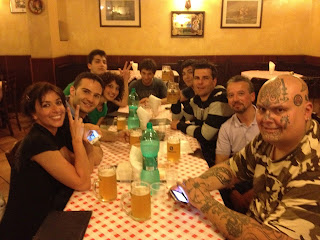 With Junio, Orlando and Masaru I worked a bit in Jodan and a bit in Chudan no kamae. There were also four ladies practicing and all of them practice, at various levels, a very effective kendo. Since, in a little more than a year, I would like to try the yondan exam I am practicing to improve the seme, have a live shinai tip and I am trying to construct an opportunity for oji waza, but practicing at the Kuma No Kai was very hard, because they were all extremely fast! So it was a very nice training. After I went with them for dinner in a pub. 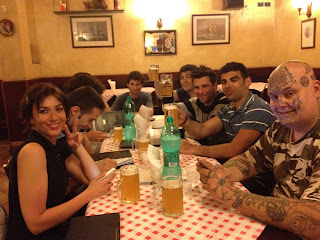 The after-kendo was very nice, I spoke expecially with Masaru and with the girlfriend of Orlando, which is a surgeon. She spent part of the his training in Korea first and now she is on the way to go for practice in Japan for 6 months.  Off course she had practiced kendo in Korea and she will do the same in Tokyo. Orlando instead was going to fly to Torino for a three days training with the Italian Kendo team with Koyama sensei. After dinner, Masaru took me back to the hotel, where I slept like a baby.
Very nice keiko and dinner, looking forward to meet them again.
Posted by Kendomaniac at 9:50 PM No comments: