It was totally unexpected, I got an invitation to participate to the 1st NGS Asia Meeting in Singapore in October.
I was in Singapore the first week of October, a very busy week, a lot of science and talks at SiGN. It was a very useful trip and off course I managed to have two session of Kendo!
I was very glad to be back at the Singapore Kendo Club. Going to the SKC is now like visiting some old friends and I have to thanks a lot Yeo sensei and all the students for the warm welcome I get every time I go at SKC. This time I managed to practice twice, on Sunday and on Wednesday, at the Dojo in the Japanese Changi School. This time was my first time on Sunday training, a lot of people, very impressive! On Sunday morning are present many sensei and it was very nice to practice. On Sunday the first hour is dedicated to kendo no kata and I am very grateful to Yeo sensei since he introduced me to the kodachi kata 8 and 9. It was very useful and interesting. Since it was my first time I only managed to acquire the basic movements but it was a very useful start. After we started the usual warn up and suburi. After men-o-tsuke we started kion and jigeiko. During jigeiko I managed to practice with Takamori sensei ->

As suggested by Doug sensei from Seattle Kendo Kai, during my trip in Seattle on last July, I am trying to improve my seme. I tried to make pressure to Takamori sensei but it did not work at all. After the training I asked him about the jigeiko and he told me that I was getting too near before attaching and the seme was not present. I knew that seme is not an easy task, but I am very far away from a correct application. On the basis of sensei comments I realized that, trying to apply pressure to the opponent, I was mainly getting near to him instead to create the right occasion to attach. I have to add to the work with the body also the work with the shinai, to create an opening that will make more easy the attach....I will continue to try.
I really enjoyed the training on Sunday. After I was very grateful to Yeo sensei for the invitation to participate to the lunch for the departure of one of the Japanese sensei. We went to the restaurant where the chef have invented the curry crab. I also learned some new things about Singapore. Specifically Yeo sensei told me that all the Changi area was produced transferring the soil from the internal hills to grab new space from the sea.
We had a very delicious lunch with a lot of food that I never tried before. I had a very pleasant talk with a Kendo student sit near me and with my Greek friend Periklis that is now living in Singapore and practice Kendo at SKC. It was a very nice Sunday. 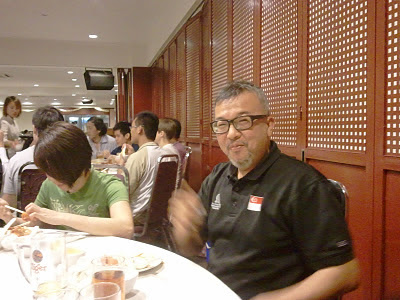 On Wednesday the training was pretty similar to the one on Sunday although the number of students was little less. The training was very nice and I managed to have some jigeiko with various students that I met during my previous trips to Singapore and also with Renata.
I got back in Italy on Saturday and I was grabbed by the teaching duty and working routine.
Now I am waiting to meet again Yeo sensei and the Singapore Kendo team at the Kendo Championship that will be held in Novara in May 2012.


Posted by Kendomaniac at 6:25 PM No comments: