Every two years I participate to the AACR meeting in washington DC. it is an important event for cancer researchers all over the world. This meeting was also offering me the opportunity to visit the two Kendo Dojos located nearby Washington DC: Budokai Dojo, 25 S. Quaker Lane, Alexandria, VA 22314 and Washinkan Dojo, American Dance Institute 1570 East Jefferson St. Rockville, MD 20852.
I contacted Brian Sherry, NOVA Budokai Dojo and Summerlin Walker, Washinkan Dojo. They were both very kind and helped me to define the best way to get to their Dojos. I also got a nice invitation to join Brian and other people of the Dojo for early dinner.
It was a very nice situation in principle I was expecting to arrive on Saturday April the 17th and having keiko on Sunday and Monday. Great hope! However, I was not considering the "nature" was planning something else for many travellers all over Europe.
At the end of march a Volcano, located under an Iceland glacier with a unpronounceable name (Eyjafjallajokull), decided that it was the right time to wake up.

So in the last week an enormous amount of volcanic ash has been released between 5000 to 10000 meters, where almost all flying routes are located. 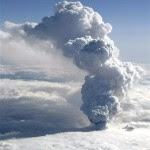 The result is that almost all airports in Europe where closed in the last three days and also my flight of this morning was cancelled.
Right now I managed to contact Lufthansa reservation center, 1h 30' waiting on the phone and I have been re-protected on a flight to Chicago on Wednesday the 23th. I will miss the AACR meeting and the keiko at Washinkan and Budokai but I still manage, mybe, to present the work of my lab at Lurie Cancer Center of Northwestern University and meet again for keiko the people of Chicago kendo Dojo and visit for the first time the kendo Dojo of the Chicago University one of the most famous University in USA.
This schedule is still in the hands of the Eyjafjallajokull volcano.
More news after Wednesday April the 23rd.....
....I am very sad an other cancellation for today. The only option would be to leave to USA on Friday. But staying in USA only four days is too little for the trip length, so at this time I decided to cancel the trip, waiting for an other interesting meeting that might bring me again in USA providing me the occasion to have keiko in USA Dojos.
Posted by Kendomaniac at 10:23 AM No comments: