It is quite a long time that I do no write on the blog. I was very very busy time since last November. I was traveling a lot but I did not have the time to write about my trips.
In this post I would like to summarize what catch in the last one and half year trying to pass the Yon dan exam.
In November 2013 the three years needed to participate to Yon dan exam passed for me. The time passed very quickly and I took the opportunity, together with few friends, to try the Yon dan exam in December 2013 in Brussel.
The seminar was interesting and challenging and the day of the exam arrived. Below you will find the two videos related to my exam jigeiko


I did not pass but I was happy for my friend Simona that passed the exam. On the way back to Torino I was thinking about the exam. I had the feeling that my seme was not strong enough and I decided to work on it.
From January to June I traveled a lot and off course I had keiko in all places where I could find a dojo open during my stay in:
Suddenly it was June, and there was another occasion to try again the Yon dan exam.  This seminar was very nice and it was also the first totally run by all the Italian Nana dan sensei (Moretti, Zago, Lancini, Pomero, Bolognesi and Murata). It was a very interesting a useful seminar. We were divided in three groups: 2, 3 and 4 dan.
Two sensei were supervising each of the groups. In the 3 dan group we had Moretti and Murata sensei as instructors. Murata sensei was the main player of the seminar and Moretti sensei was looking at us to provide suggestions. The seminar opened my mind on the requirements for the 4 dan exan.  The point that made me thinking more was that "we should show an attacking kamae full of spiritual energy and not a waiting kamae that reacts to the opponent". Very clear point but very difficult to be applied. Also the tips on kata were very useful, I learned thinks that I never heard before. But practice was off course the most important and useful part. So we had a very nice Saturday and Sunday morning. On Sunday we did some jigeiko exam simulation supervided by Moretti sensei. For my jigeiko he told that it was a good jigeiko for a 3 dan but it was not expressing well what was required for the 4 dan exam. Then the exam time came, I am quite short, 1m 63 cm tall, usually I practice with persons taller than me. This time I had as opponent a lady tall as me, so all my prefered oji-waza, kaeshi dou, was not ideal and I was not very strong in suriage men. So debana kote was the only oji-waza left :-(.
However, my main error during the jigeiko was being afraid to be bit, so the concept of "attacking kamae full of spiritual energy" was gone (see jigeiko below). I did not managed to make any good strike and same applied to my opponent. Second jigeiko was slightly better but still not in frame with 4 dan exam. The final result was that I did not passed.

Below the video of my jgeiko.


The comment of my sensei, Walter Pomero and Arialdo Bolognesi, were that I was not even doing the kendo that I was practicing in the dojo at home. Both Murata and Lancini sensei told me that I was not able to express the requirements for the 4 dan.
After the Summer holidays I started again the practice  and I try to work on seme, suriage men and an active attacking kamae. Although I was not completely satisfied of my preparation there was a extra session of exams in November at Novarello, which is relatively near to Torino, so I decided to try again.
The seminar was held from a Japanese committee and we did a lot of basic techniques. Unfortunately the dojo was relatively small and we were too many, so too little space for practice.
I did the exam with one person that I never met before and the second partner was part of my group in May. The first jigeiko started well, in my opinion, but in the middle of the exam, I did an attach that did not reached the opponent because he stepped back, I tried to recover but I did not managed and my spirit dropped and my next kote attach was unsuccessful and the opponent managed to make a good oji-waza. The second jigeiko was better, at list is what I felt, I managed to place at least a good debana kote. However, it was not enough, and also in November I did not managed to pass.
Then, I was very busy again and I spent 10 days between Boston and San Francisco. I managed to practice at Boston Kendo Kyokai, where I was few months before, and I had there a very nice practice. One of the Japanese instructors provided me some hits to improve my attacking kamae.
Then, I was in San Francisco and I practice at San francisco Kendo Dojo. It was a very nice night and the sensei lady was very kind to provide hits to improve my posture. There were many senior kendoki and the jigeiko with them was very interesting. After I could not join them for a beer, because I was meeting with one of my friends living in USA. He was also in SF for a meeting and we took the chance to have dinner together.
On my way back to Torino I was very committed to  work hard for the next kendo exam session. In the mean time, because of my work, I practiced again in Rome and Heidelberg. In May 2015 I was again in Modena for the seminar and the exam. As the year before, this was the session run by the 7th Dan Italian sensei. 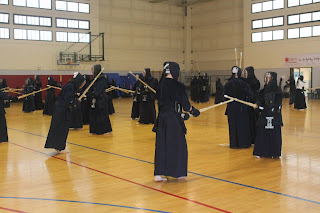 Our group was supervised by Moretti and Bolognesi sensei. Moretti provided us very useful hits that were refining my preparation for the 4 dan exam. It was a very nice seminar. This time I was in the last but one group of the exam, together with Zaccone (First on the left in the picture below). 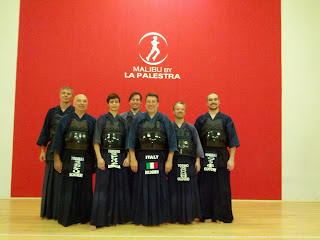 We know each other by long time and we have the same age. Since The first jigeiko was with him and it was helping me in being more relaxed.  The third person in our group I never met before. This time it seems that the work done during the last year was useful, I was not afraid to control the opponent and I found the right time to attach and counter-attach.  The second jigeiko was a bit more difficult, since the opponent was tall as me, but this time I was prepared to handle such situation. So me and Zaccone passed, indeed. I was incredibly happy, but I had to rush to the Bologna airport because next day I was speaking at a meeting in London. During my time at the airport I described my happiness on FB and it was nice to have feedback from all my kendo friends in the world. Next Monday was also very nice because I went practicing at the Rebook Sport Center with Yung Park. 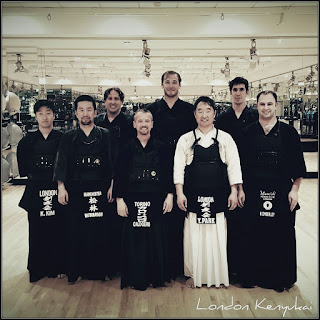 Very nice keiko and off course beers for everybody to celebrate my 4 dan :-). Few days after I celebrated again with keiko and prosecco at Ken Zen Kan club in Heidelberg and then at Chicago kendo Dojo in July:
Now it is September and the kendo practice started few weeks ago, after summer holidays. I was in Barcelona for the Informatics Illumina Summit 2015 and I practiced at Ruoshinkai club. It was a nice practice with some differences with respect to the practice I had in other dojo. There was a lot of combined techniques that were a bit hard to ketch because the sensei Ryo Hiruma, was speaking in spanish and, although Italian and Spanish are similar, I had some difficulties to catch the commands. After we had mawarigeiko and a refreshing beer to finish :-). Now I am ready to leave to Heidelberg where I will be in EMBL and I will run for three day the Whole Transcriptome Data Analysis EMBL Advanced Course. Off course on Tuesday evening I will be at Ken Zen Kan club for keiko!