Sunday 30th of March
Today I arrived in Cambridge, UK, to participate to a workshop on "High Dimensional Statistics in Biology" at the Isaac Newton Institute. I room, for the time of the meeting, is located at the Wolfson Court which is near by the Institute.
On internet I found the Cambridge Kendo Club, which is a "virtual" dojo, meaning that they practice in any place where they can. The Sensei is Italian, Frank Stajano. I contacted the Captain/instructor of the Dojo, Satoshi Yamazaki, to practice with them. This week I will join their training on Monday and Thursday.
Monday 31st of March:
It was a tough night, since I walked 45 minutes with the bogu and shinai to get to the Dojo, then I had two hour training and other 45 minute to get back to the Wolfson .
I am tired, thirsty but happy. Whenever I get to a new place I am quite nervous, and this was also true in this case when I arrived at the Dojo, since Satoshi arrived only when we enter in the Dojo. However, I manage to introduce myself to Sensei Frank and I joined the practice with them. 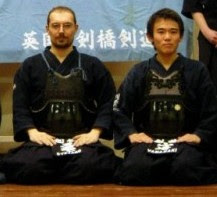 The training was divided in katas (40 minutes), followed by a quite hard worm up especially for the sonkyo suburi, I am still filling it in my legs. Subsequently we wear the bogu and did few rounds of kirikaeshi and kihon.
Then, Satoshi was also describing some of the training he had during the previous weekend with his training with a Japanese Sensei. We focus on the practice of debana men and debana kote. The last 20 minutes were used for jigeiko.
Thursday 2nd of April:
This time I was more relaxed and, being back to the Dojo, was like meeting some old friends .
The training was very similar to that of Monday but we spent some time on kaeshi do and nuki do.
I managed to make jigeiko with nearly all the people in the Dojo. I have to admit that on Thursday I was a bit more slow because the night before we had the meeting social dinner and few beers in the pub where researchers claim that Watson and Crick finalized their idea on the double helix structure of DNA.
Getting back to the Thursday training, Frank suggested me to work more on the extension of the left hand when I do men. It is a very good comment and I will work on that.
Finally few words on the Dojo people, the vast majority of the people is quite young as expected in a town where Colleges and Universities have an extreme density. It was very nice to talk with them and having training together.
Posted by Kendomaniac at 7:22 PM No comments: