Between February to May 2014: Munich, Rome, Voghera & Heidelberg.

2014 is  a busy year from the working point of view and I got little time to update my blog on the kendo travels.
Budo Muenchen Club: In February I have been in Munich for the first report meeting of the NGS-PTL FP7 research project in which I am involved. I took the occasion to visit the Budo Muenchen Club. The club represents a particular condition in the kendo world since they practice  Japanese feudal Kendo. The instructor is Thomas Preston, 5 Dan. The kendo practice, at the Budo Muenchen Club, comes from the knowledge gathered by Thomas in Japan and Hawaii. In the practice, they use the fukuro-shinai, which is heavier of a conventional shinai. They perform only large techniques that would be effective in an actual armored sword-fight.
I arrived a the dojo half an hour before the start of the training and Thomas told me about their practice and provided me a leather cover for my shinai. Thomas organized the training in the following way: we had a brief warm-up and then students practiced on basic techniques between them and they did mawarigeiko with me. It was a quite challenging training because I had jigeiko for 45 minutes without stop and I had to remember to use only big techniques. The students used always multiple techniques as shown in the video below.

I used a lot jodan no kamae since it was a quite useful kamae in this specific environment.  I also had to keep a high concentration to interact with a kendo style, which is quite different from the one I am normally used to.

Andrea practiced under the supervision of Gianfranco Moretti, 7 Dan, in Bergamo and when he moved to Rome he started the Okami Kenndo Club. The dojo is located in a very impressive multi-activity sporting center: Sporting Village.
The practice at the Accademia Romana and at the Okami is quite different. At the Accademia Romana, during the training, there are various groups divided by their level, which are bring together again for the final Jigeiko. At Okami instead the level is more homogenous and all practice is under the supervision of Andrea. Students are quite young at Andrea's dojo and the practice is very shai oriented. I had a very good time at both dojo and I hope to visit them again.
Heijoshinkan Club: It was a long time that I did not visited my friends in Voghera at the Heijoshinkan Club.  I knew that they started a training at 18:30 on Monday and I took the chance to visit them. It was very nice to see again Claudio Scacheri, 5 Dan, and all the others kendokas. We had a nice training focused on the right posture and mind for the yon dan exam, since me and other two at the Heijoshinkan Club will try the examination on the spring seminar at the beginning of June. It was a very nice practice and Claudio as usual put 100% of his spirit and knowledge to provide us the best hits to improve our kendo. 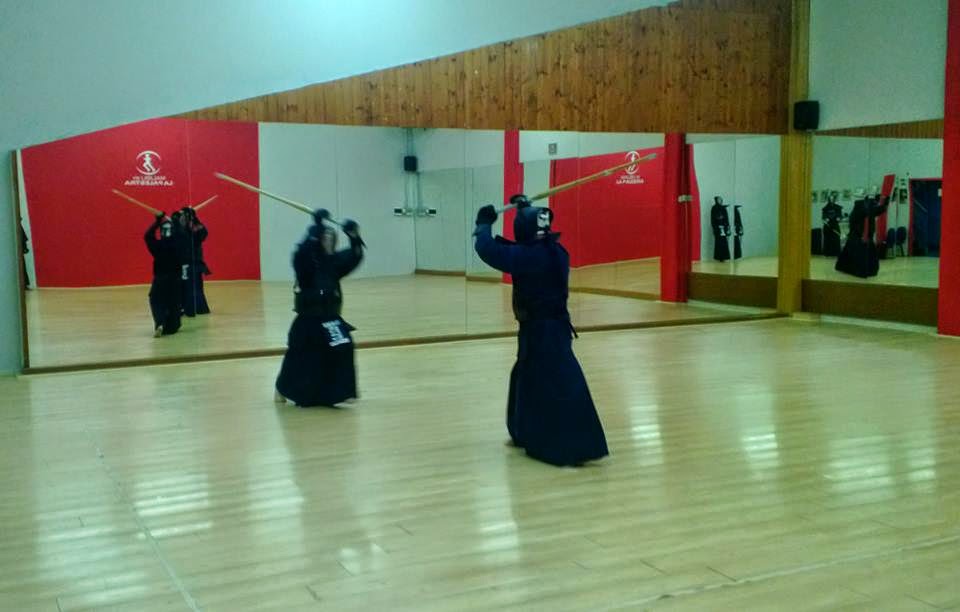 Ken Zen Kan Club: Usually I go in Heidelberg at the end of June for the Whole Transcriptome Data Analysis that I run with Vladimir Benes since 2010. This time I participated to the CORE for Life meeting at EMBL and I took the chance to visit again the Ken Zen Kan Club. I met Volker and his wife, Franco and many other friends. This time there was also an other guest from Canada, practicing nito. I had a great keiko with all of them.  After the practice I had the possibility to talk about kendo in front of a beer with Volker and his wife. I am looking forward to meet them again at the end of June when I will be in Heidelberg for the Whole Transcriptome Course.
Posted by Kendomaniac at 9:54 PM