This is the last trip of this year. I was in Copenhagen for the second time in my life. This time I was at the BRIC research centre for a talk and for some discussion about a collaboration project going on. I was invited by Giorgio,  which is a very smart PhD student that I met few years ago in Italy. Although December is not the ideal time to visit Copenhagen I had few hours to visit the town.
The trip was a bit tricky. Normally I fly with Lufthansa, but this time I had to use Air France since it was the cheapest flight. The connection between Torino and Copenhagen, via Paris CDG, is not the best. I arrived in Paris about 1 hour before the departure of the flight to  Copenhagen but, the connection  between the 2G terminal and the 2D terminal is a nightmare at CDG airport. The only way is taking a shuttle bus and pass again the security check. The result of such procedure was that I got on the plane few minutes before departure. Off course, my luggage, i.e. my bogou!, was not loaded on the Copenhagen plane. So at the Copenhagen airport I had to ask to deliver my luggage to the hotel. Fortunately I arrived on Sunday evening and the training was on Monday evening so I was expecting to be so lucky to get the luggage on Monday morning.
I spent the evening in a nice sushi bar with Giorgio and I learned some things about leaving in Copenhagen. First of all bicycles are the most used method of transportation, it is amazing to realize that the main noise in the street is made by the bicycles' wheels rolling on the street! 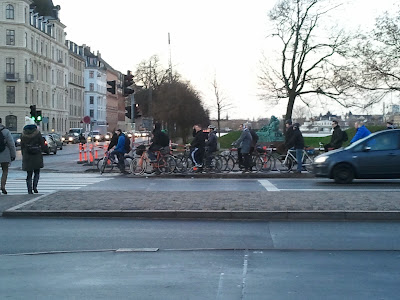 Furthermore I learned that, as Christmas is approaching, Xmas parties are organized between colleagues, friends and gym people, so the period is very busy! It is notable that Xmas parties are sort of standardized, you start with a "gloog", a wine hot punch, and the party continues with a lot of food and drinking snaps! The party ends with a very good cake made by cream, nuts and cherry glassa. I tested the cake at the caffeteria at lunch time and...I am still digesting it ;-).
In Copenhagen everything is extremely well organized, you can also find indication where pets should walk! 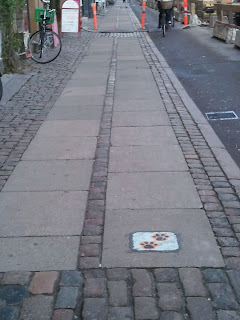 On Monday I spent some time with Giorgiotalking about our research project and later in the afternoon I had a brief walk in Copenhagen. It is really a nice town. I had an early dinner, at 17:00 with Giorgio. This is really very early for an Italian, but since I had to go to the dojo at 20:00 I had to eat early, also because after 22 it is practically impossible to find any food in Copenhagen, unless you look for a kebab.
About 19:30 I walked to the USG Kendo Club, it was only a couple of Kms away from my hotel. I got to the University gym where the USG people practice on Monday, see picture below, the entrace is on the right side of the building. When I arrived I spent some thime talking with two young kyusha that are practicing at USG Kendo Club. I learn from them that there are few little Kendo Dojo in the country. After a while few other people arrived and I met Martin, that was my contact to attend to the practice. Martin told me that, since there was a very nice Christmas party on Saturday 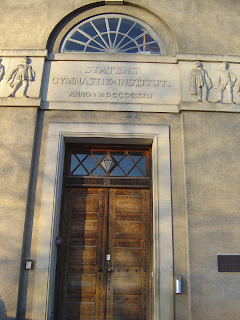 probably we would not have too many peersons at the practice. We started about 20:00 we were six with the bogou and about 10 beginners without bogou. We started a warm up all together. Warming up was very similar to our training in Torino, a little bit of run, stretching and basic suburi. After, one of the students with the bogou took the very beninners, as instead we continue some basic techniques with some the advanced beginners. We worked a bit on the foot work and on big techniques: men, kote, do, kote/men.
After we did the Mentsuke and we had various rounds of kirikaeshi, followed single and combination of techniques. About 21:30 we stop for few minutes and we made a full round of mawarigeiko. The two young students were very committed, and although they need further practice, the were showing a good timing and attitude. Also the jigeiko with the more experienced people was very nice.
It was a very nice to practice. We finished few minutes after 22:00 and a grab all my stuff and decided to have a shower at the hotel. I really hope to get back in Copenhagen in the futere and practice again at the USG Kendo Club, mybe in Spring when the weather is more pleasant.

Posted by Kendomaniac at 6:31 PM