May 2010: Back again in Heidelberg

I was invited again from Vladimir Benner to be one of the instructor of the Whole Transcript Microarray Data Analysis co-organized by EMBL and Affymetrix. I arrived on Sunday afternoon at Frankfurt airport. I really like to fly Lufthansa, I got out of the plane and in the time I needed to walk to the luggage delivery my bogu and shinai arrived, wonderful!
A shuttle bus service was waiting for me and in 70 minutes I was in Heidelberg. This time I stayed in an hotel down town and not at the ISG guest house that is nice but very far away from Heidelberg center. I was lucky since on Sunday there was a warm sun and I had a nice walk in the old Heidelberg town. 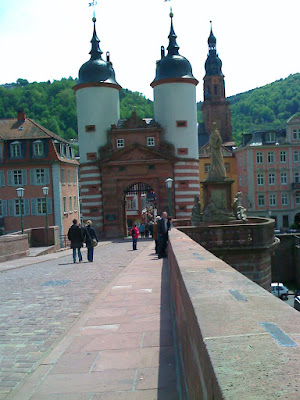 The course was fine, at least from my point of view, and students seemed to be happy with the information and training we have provided. On Tuesday I did not joined the social dinner and I went again to practice at Ken Zen Kan.
It was funny because one of the instructors asked me if I was going to visit my girlfriend. Well .... my wife should not worry about it I only went out for safe and nice kendo training.
I arrived at Ken Zen Kan quite early and I spent about half an hour talking to a young kendoka about Kendo. He got recently the 4th kyu and listening to him was clear how much he liked Kendo. About a quarter to eight all the other people arrived and I met again Volker the President of the Dojo and Franco. It was nice to see them again and it was clear that they were happy to see me again. This is something that is wonderful in Kendo, you go in an other Dojo and you feel like at home. 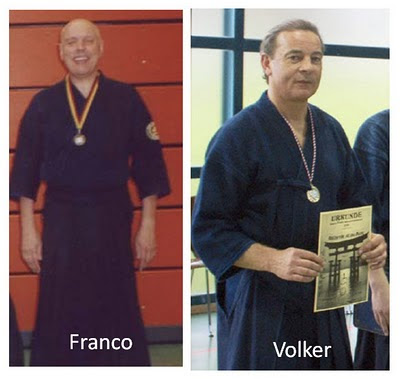 We started the training with a warm up, running stretching, suburi. Then we did the Rei and men tsuke.
As last time I was at Ken Zen Kan, Franco was taking care of the training of the beginners without bogu. Volker took care of the others. We started as in our dojo with basic kihon, big men, big kote men, big do. I had to be very careful in listening because my broken german is getting very limited and I was sometime missing words that I should know. We did the kihon changing partner every time and on one side of the dojo a person with the bogu was being motodachi for the advanced beginners. The idea is quite nice since the beginners do their techniques always again somebody different and this improve their skill. After the basic kihon we did some double attach like as kote, do; kote, suriage men. After we started jigeiko and I managed to do nearly with every body. It was really a pleasure, clean jigeiko that allowed every level ot express themselves. I am a bit disapointed since I did not managed to do jigeiko with the young japanese that joined the dojo for a couple of years since he is studing history at the Heidelberg University. I did only an exchange of kote men during the kihon and he was like a shinkanen, very very fast. I hope I will managed to do jigeiko with him next time I will be in Heidelberg. At the end of the training I was quite wet but not too tired, probably because the "heavy" training of Sumi sensei during the previous week end was particularly effective.
After training Volker was telling me that some of the people of the dojo will take a week holidays in Italy later this year and the will probably practice Kendo in the dojo of Angela Papaccio in Firenze. After the shower I got a lift from one of the students and I get back to the hotel. In the car we were speaking about the differences in the training in the various dojo and I told him that, at list on the basis of my limited experience, training is very similar everywhere and the real variable are the kendokas. I also told him that in our dojo beginners, that are much less of those I have seen at ken Zen Kan, start quite rapidly to practice with all the other and the lesson is usually divided in two parts, in the first the higher Dan behave as motodachi for the other for kihon and jigeiko then the practice is plit in two parts and higher dan do jigeiko between them as the lower grade between them.
Since it was quite late, when I got at the hotel, I took a big Doner Kebab a coke and a bottle of water and I had my dinner in my room.
Posted by Kendomaniac at 7:52 PM