I arrive yesterday in Kyoto.
During the day I started following the ISEV Meeting and at 16:00 I met Donatella Castelli (7 Dan) at Kyoto station. We went together to Nara to visit Inoue sensei. After a coffee at the station we went to the Nara budo center and we had gigeiko for one hour with Inoue sensei and an other 8th dan sensei.
In total we were 6 people and three of them 7th Dan. I was the last in the line ^_^
First we all did keiko with the two 8th sensei, then two local 7th dan did a test for the 8th dan exam. Then, we had free gigeiko and I did ippon shobu with the 8th dan sensei, in Jodan, and two brief gigeiko with a man and a lady. Those gigeiko were in chudan and only on the last ippon I move to jodan no kamae.
After keiko I got some comments from Inoue sensei. He told me that my upper part of the body shows a good posture and power, but my legs do not show the same power and frequently the tip of shinai reach the opponent before the right foot stamps on the floor. He told me that I need to better integrate upper with lower part of the body.
So I have some work to do ....
After keiko we had a nice dinner with Inoue sensei and we got back to Kyoto.
During dinner Inoue sensi said that when we do gigeiko any of our opponents has to be consider as our teacher and, independently from opponent level, we have to approach him/her with full spirit. I find this observation very important and complementary to a comment from one of my instructors, Bolognesi sensei (7th Dan), which told me that I have to practice as much as I can with people to whom I find difficult to interact and practice during gigeiko. Arialdo said that since the opponent is somehow difficult it mean that I need to add something in my kendo to be able to control and effectively practice with such person. 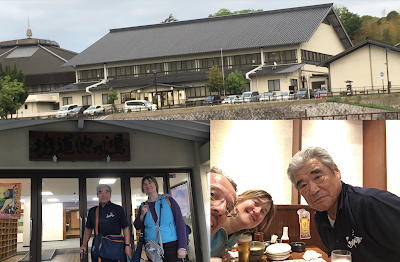 Posted by Kendomaniac at 2:32 AM